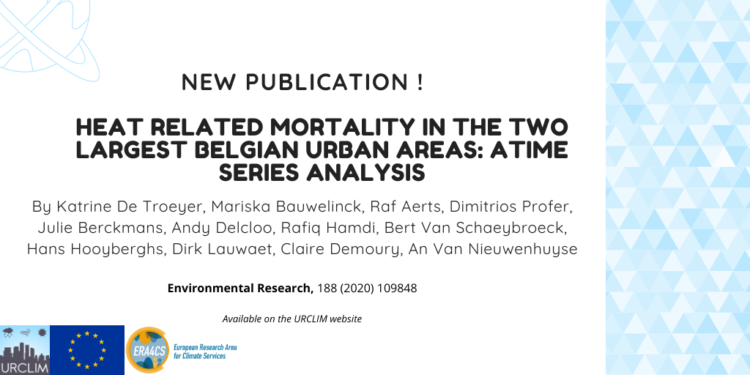 Background: Summer temperatures are expected to increase and heat waves will occur more frequently, be longer, and be more intense as a result of global warming. A growing body of evidence indicates that increasing temperature and heatwaves are associated with excess mortality and therefore global heating may become a major public health threat. However, the heat-mortality relationship has been shown to be location-specific and differences could largely be explained by the most frequent temperature. So far, in Belgium there is little known regarding the heat-mortality relationship in the different urban areas.

Objectives: The objective of this study is to assess the heat-mortality relationship in the two largest urban areas in Belgium, i.e. Antwerp and Brussels for the warm seasons from 2002 until 2011 taking into account the effect of air pollution.

Methods: The threshold in temperature above which mortality increases was determined using segmented regressions for both urban areas. The relationship between daily temperature and mortality above the threshold was investigated using a generalized estimated equation with Poisson distribution to finally determine the percentage of deaths attributable to the effect of heat.

Results: Although only 50 km apart, the heat-mortality curves for the two urban areas are different. More specifically, an increase in mortality occurs above a maximum temperature of 25.2 °C in Antwerp and 22.8 °C in Brussels. We estimated that above these thresholds, there is an increase in mortality of 4.9% per 1 °C in Antwerp and of 3.1% in Brussels. During the study period, 1.5% of the deaths in Antwerp and 3.5% of the deaths in Brussels can be attributed to the effect of heat. The thresholds differed considerably from the most frequent temperature, particularly in Antwerp. Adjustment for air pollution attenuated the effect of temperature on mortality and this attenuation was more pronounced when adjusting for ambient ozone.

Conclusion: Our results show a significant effect of temperature on mortality above a city-specific threshold, both in Antwerp and in Brussels. These findings are important given the ongoing global warming. Recurrent, intense and longer episodes of high temperature and expected changes in air pollutant levels will have an important impact on health in urban areas.