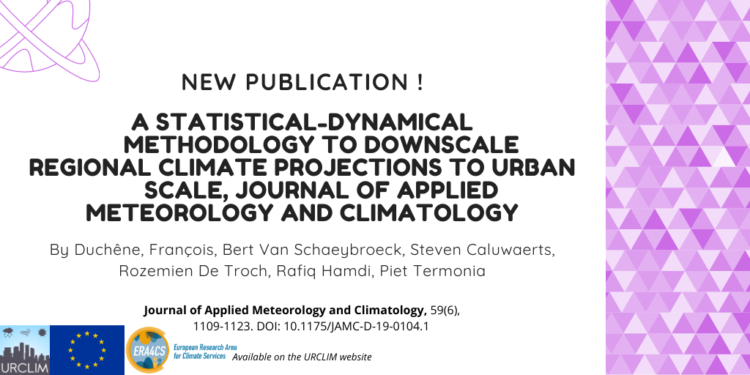 The demand of city planners for quantitative information on the impact of climate change on the urban environment is increasing. However, such information is usually extracted from decadelong climate projections generated with global or regional climate models (RCMs). Because of their coarse resolution and unsuitable physical parameterization, however, their model output is not adequate to be used at city scale. A full dynamical downscaling to city level, on the other hand, is computationally too expensive for climatological time scales. A statistical–dynamical computationally inexpensive method is therefore proposed that approximates well the behavior of the full dynamical downscaling approach. The approach downscales RCM simulations using the combination of an RCM at high resolution (H-RES) and a land surface model (LSM).

The method involves the setup of a database of urban signatures by running an H-RESRCM with and without urban parameterization for a relatively short period. Using an analog approach, these signatures are first selectively added to the long-term RCM data, which are then used as forcing for an LSM using an urban parameterization in a stand-alone mode. A comparison with a full dynamical downscaling approach is presented for the city of Brussels, Belgium, for 30 summers with the combined ALADIN–AROME model (ALARO-0) coupled to the Surface Externalisée model (SURFEX) as H-RES RCM and SURFEX as LSM.

The average bias of the nocturnal urban heat island during heat waves is vanishingly small, and the RMSE is strongly reduced. Not only is the statistical–dynamical approach able to correct the heat-wave number and intensities, it can also improve intervariable correlations and multivariate and temporally correlated indices, such as Humidex.