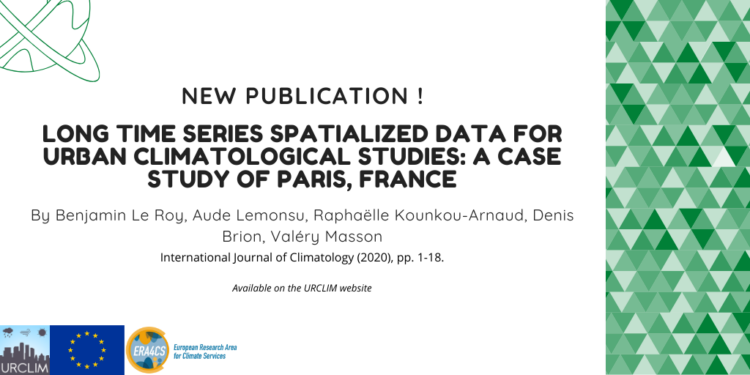 Historically, the urban climate and its interaction with regional environment and larger-scale meteorological phenomena have been studied by comparing weather stations in urban and surrounding rural areas. Nevertheless, spatialized meteorological data are now available with different spatial resolutions, temporal frequencies, and time depths. Here with the Paris area as a case study, three products were selected for their comparable spatial resolution of 1 km, their daily frequency, and a minimum 15-year time period with substantial common overlap: the MODIS products for land surface temperature (2000–2016), daily maps of minimum and maximum 2-m air temperatures (2000–2017) based on a statistical method of spatialization, and the COMEPHORE analysis for precipitation (1997–2012).

Several spatialized indicators were used to monitor the urban climate and its impact on local climate. The intensity and spatial extent of both thesurface urban heat island (SUHI) and the urban heat island of urban canopy layer (UHI), as well as the effect of the city on precipitation, were characterized. Basedon these indicators, a climatological study was made for the Paris urban area and its surroundings. The comparison of (S)UHI climatologies showed that both phenomena (qualified by their intensity and spatial extent) have comparableseasonalities and orders of magnitude at night.

The maximum intensity is reached in July, with more than 60% of the city affected by high temperatures.However, the phenomena differ during the day: the SUHI is mostly driven by the differences in surface properties between urban and rural environments, whereas the UHI is more influenced by general wind circulation and local atmospheric turbulence.

Finally, the COMEPHORE analysis highlighted the influence of the Paris urban area on rainfall. It is observed throughout the year with an excess indaily precipitation of 29% downwind of the city, with some seasonal variability showing a more pronounced effect in summer.

This research enabled the validation of the AROME model, when used in climate mode at very high resolution (2.5km) on an agglomeration/city.